The Italian phrase for “quanto basta” might go against everything we know about recipes, but that’s what makes it so perfect. 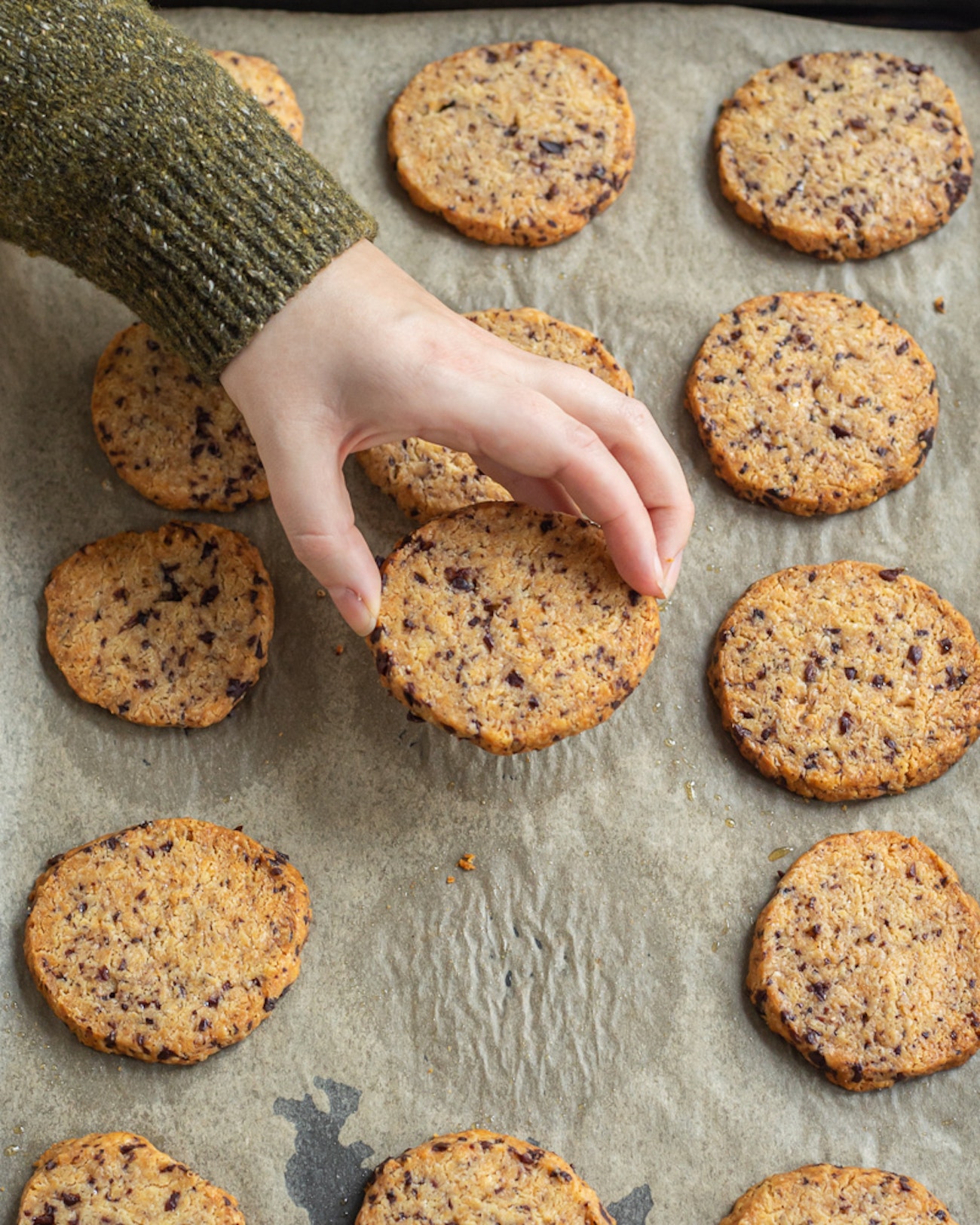 Sometimes it's best to use a hands-on approach when cooking.

I was reading through an Italian cookbook the other day, fumbling through it as well as I could using Google translate, when I encountered the phrase “sale quanto basta”. “Sale” I was familiar with – it’s Italian for salt, and I bloody love the stuff. But it was the “quanto basta” that caught my eye. Often abbreviated as “qb”, “quanto basta” roughly translates to mean “just enough”. It’s a term used liberally in Italian cooking; it’s not strange to see a recipe’s ingredients list that features “olio extra vergine d'oliva qb”, “semi di finocchio qb”, and “parmigiano qb” at the same time. But how was I, a British middle-class man living in London, supposed to know much salt or olive oil was “just enough” for an Italian cookbook author?

The English language equivalent “to taste” is a phrase that rears its head on occasion, however, doing things freestyle isn’t really in our DNA. We much prefer a solid and sturdy measurement of parmesan grated over our amatriciana, preferably in grams though ounces will suffice. Seeing “qb” written down so confidently and decisively, I felt a bit lost at sea with no one to hold my hand. At least, I felt that way until it dawned upon me that that was very much the point. I wasn’t reading a recipe that wanted to spoon feed me rigid instructions until I reached a carefully calculated end-result. I was reading a recipe that wanted to teach me how to cook. While some might see “qb” as a bit of a cop-out – as well as a wily means of a recipe writer keeping some of their secrets to themselves – it’s actually part of the magic and joy of cooking.

Like making potions in the bath, cooking should instil you with a madcap sense of adventure where you’re willing to try out myriad methods and techniques to see what sticks. Knowing that 30ml of L’Oreal plus 50ml of Head & Shoulders and 25g of a Lush bath bomb equals a big, sudsy beard is great and all, but a good portion of the enjoyment comes from figuring the combination of that concoction out for yourself the hard way, often with tears in your eyes. The same goes for cooking.

I know this all seems a bit rich coming from someone who works and writes for a recipe website, but I do think that many of us have become so caught up in the exact science of cooking that we’ve forgotten about the importance of intuition. Most nonnas, mémés, and nans don’t even have their recipes written down; everything they do is innate, and I can guarantee that the food they cook tastes a hell of a lot better than yours. No offence.

The reason why your grandma is likely a better cook than you is that they came from a generation of cooks who weren’t glued to the instructions screenshotted on their iPhones and weren’t constantly rewinding YouTube videos to find out how Gordon Ramsay dices an onion. They would actually taste their food as they went along – they’d touch it, feel it, and use all of their senses to determine whether something needs a little more of this or a lot more of that. I can’t help but feel that home cooks today (myself included) have become far too reliant on prescriptive recipes as opposed to genuine intuition. When was the last time you felt a piece of salmon for its doneness instead of checking your timer?

It’s that “quanto basta” ethos which has inspired cookbooks like No-Recipe Recipes – the debut cookbook from the popular New York Times website and mobile app, NYT Cooking. Written by Sam Sifton, the founding editor of NYT Cooking and the man behind the brilliant What to Cook newsletter, No-Recipe Recipes features 100 recipes designed to help readers make easy weeknight dinners. The catch is, of course, that there aren’t actually any recipes in it at all. Think of it more like a “book of ideas”. A rough guideline to follow that suggests different things you can make with whatever you’ve got in your kitchen cupboard. If most recipes are rigid instruction manuals then Sifton’s are more like freewheeling poetry.

Surely Sifton, then, must be some kind of radical anti-recipeist who thinks that all written recipes have become too prescriptive and that we should raze all those texts down to the ground? Well, no. “I don't,” he tells Mob, “but I think there's room for all kinds of ‘recipes,’ whether they're conversational as the No-Recipe Recipes are, or depicted in photographs or on video. I've learned to cook some cool stuff just by watching TikTok.”

“Anyone who's made a proper recipe from a book more than six times has relied on her intuition, I'm sure, and changed the recipe subtly to suit her tastes,” he continues, “I just want to make the argument that you're probably a better cook than you think you are. With confidence, you don't need a recipe. Just a prompt!”

Sifton’s level-headed approach – and belief that recipes do have a time and a place but that time and place is not all the time and everywhere – is one that I believe more people should be embracing. And it seems like they are. No Recipe-Recipes made it on the independent bookseller bestseller list last year with Cooking at Home being another recent example of a cookbook that fits within that recipe-less and “recipe less” framework.

Written by Priya Krishna and David Chang, Cooking at Home: Or, How I Learned To Stop Worrying About Recipes (And Love My Microwave) to give it its full title, is a cookbook that aims to teach readers how to save themselves time in the kitchen via simple culinary hacks and techniques. It wants to let home cooks know that it’s okay to ditch recipes on occasion and to simply taste and adjust your way through a meal instead. You can still be clear and coherent without being overly perspective. And the proof is often, quite literally, in the pudding.

One of the main tenets of the kitchen that Cooking at Home promotes is sandbagging. “In home cooking, sandbagging means you take whatever you’ve got, even if it’s not the top-shelf stuff, and find creative, resourceful ways to turn it into something delicious,” explains Priya Krishna.

For Priya, this meant ignoring the cookbook author and recipe editor part of her brain and embracing a bit more chaos in the kitchen. “I stopped writing down measurements. I added fish sauce to my salad dressing, tasting as I went, until I thought it was delicious,” says Priya, “I added a little rice vinegar to the ginger-scallion sauce because it tasted to me like it needed acid. I boiled meat until it seemed done, and then took it out and cooked the broth until it reduced and tasted good. I was trusting my own instincts.”

The dishes Priya made when she was sandbagging might not have been the “best” or “ultimate” version of what they were meant to be, but they were nourishing and delicious. Two things that every meal should be. The aim of Cooking at Home isn’t to load your brain with a filofax of recipes that you can refer to whenever you need them, it’s to make you a better cook.

“I think proper recipes can stifle creativity and force a home cook into believing that the success of a dish (or its failure!) is dependent on the recipe alone,” agrees Sifton, “that's not the case. The cook plays a part.”

That doesn’t mean that a recipe can’t be incorrect – one time we accidentally said our Wasabi Crayfish Brioche Bap recipe called for six (!) tablespoons of wasabi and I got an email from someone saying that it was “a bit hot” – but it means that you don’t have to treat it as scripture. Whether you’re on the stoves cooking a solo mapo tofu or catering for a group of your closest friends, try to relax and just go with the flow of what happens while you’re cooking. You might just like the taste of where it takes you.