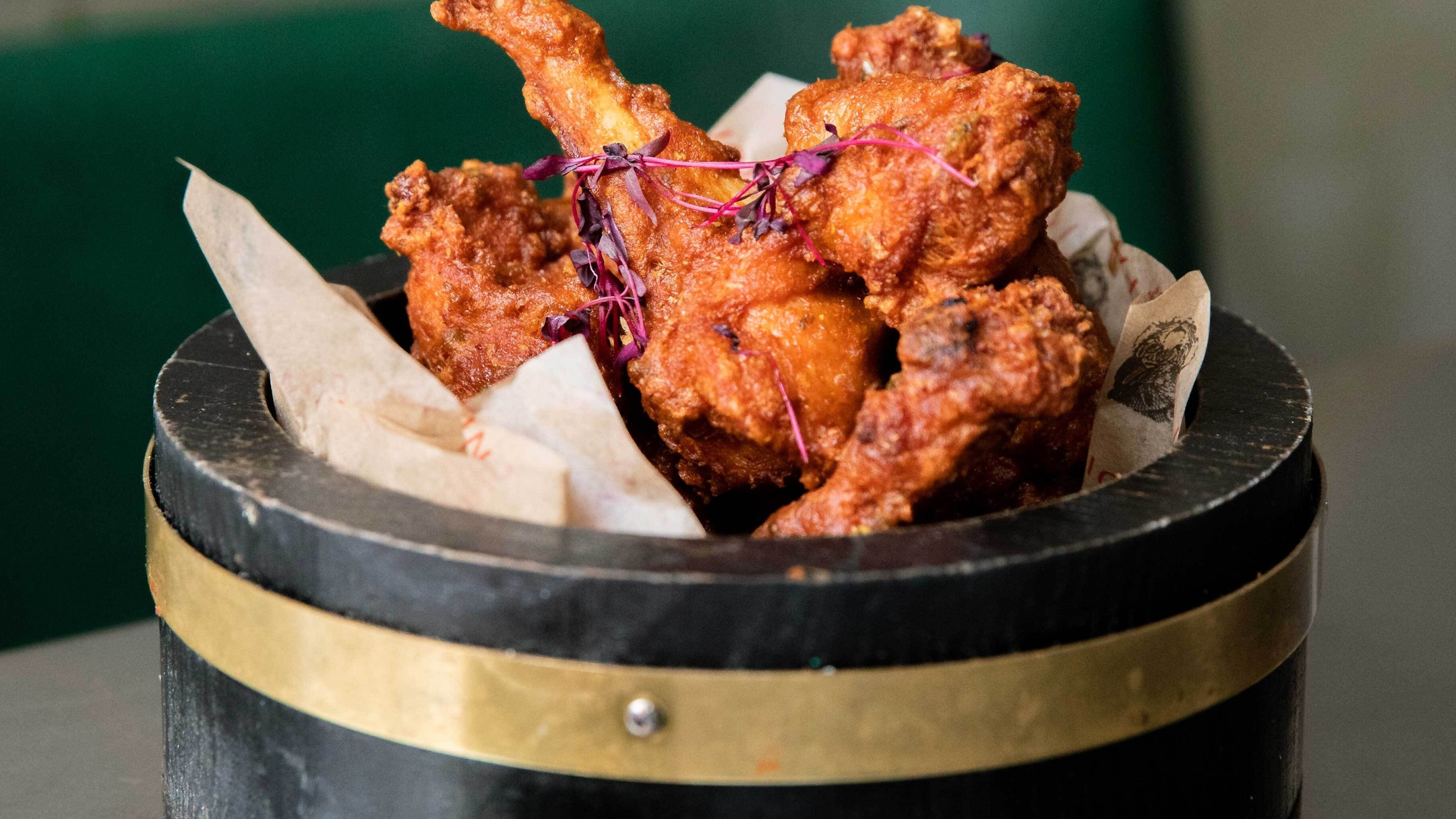 Is Fusion Cuisine The Future of Fine Dining?

Whether fusion cuisine is cultural appropriation or "the next big thing" is up for debate. Why is it that "fusion" has become such a controversial word in food?

I went out for a nice dinner the other night with a few friends of mine who are really into their food. We ate a bit too much, we drank far too much, and we laughed just the right amount. The only thing that dampened the evening was when, about three-quarters of the way through our meal, one member of our group decided to go on an F-word laden tirade. I’m not, of course, talking about the word “fuck” but “fusion”.

Fusion cuisine has become something of an obscenity in culinary circles: the very use of the words by a restaurant being seen as a marker of inauthenticity and a warning sign that you’re going to be overcharged for muddled plates of cooking. I often find myself rolling my eyes at press releases that boast about things like “modern fusion Peruvian cuisine” – a collection of words that sound fancy on paper but mean very little when put in sequence. It’s a wariness that’s been brought on by years of, let’s be honest, subpar food. Pan-Asian restaurants like Sexy Fish and Novikov have used “fusion” as a crutch and an excuse to serve under-seasoned shrimp tempura and wagyu gyozas for years without ever having consulted a single person from the continent whose food they claim to be celebrating.

“[Fusion cuisine] is kind of an umbrella term to lump in lots of different things, which I think should all be treated separately,” says Jonathan Nunn, a writer who regularly explores complicated and engaging issues regarding food and food culture in his newsletter, Vittles. “It could be a white chef thinking they're spicy for adding one Asian ingredient to a dish, it could be a whole menu that intentionally culture hops, it could be dishes born out of economic opportunism and immigration that become hybrid cuisines, or it could be a single cuisine that wears all of its diverse history in its canon of dishes,” he adds, “They should all be judged on their own merits: there are good and bad fusions just as there is good and bad food.”

Not all fusion cuisine has to be Sexy Fish levels of bad, and not all of it is necessarily “inauthentic” either. Tex-Mex cuisine, for instance, is a bonafide cuisine in the eyes of many and, according to American journalist Meredith Bethine, holds its roots in “Tejano culture (Texans of Spanish or Mexican heritage who lived in Texas before it became a republic) and also Mexican immigrants who hailed largely from Northern Mexico.” It isn’t just a mish-mash of two different cuisines but its own individual creation – a style of food that represents that specific Texan-Mexican diaspora – which has taken inspiration from different culinary traditions to form something totally unique as a result. 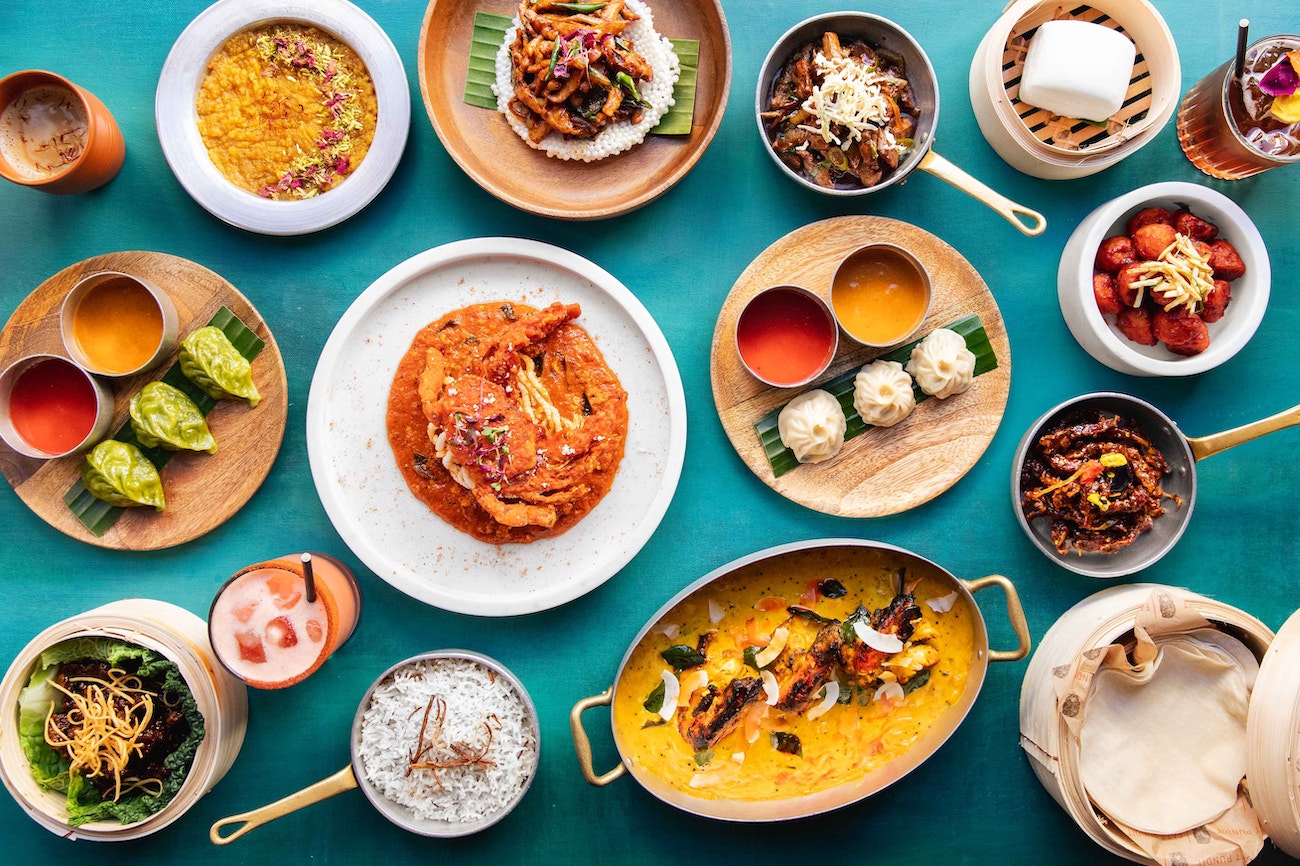 The menu at Fatt Pundit is a gallery of Desi-Chinese eats. Photograph: Joe Howard.

The same can be said for Indo-Chinese (also known as Desi-Chinese or Hakka-Chinese) cuisine: a distinct culinary style that combines aspects of, you guessed it, Chinese and Indian foods. It’s claimed that Indo-Chinese originated when Chinese immigrants settling in Kolkata began cooking and selling the foods they grew up with in their homeland. The availability of spices and ingredients – as well as a need to cater to locals via increased vegetarian options and a more liberal use of spice – shaped that traditional food into the Indo-Chinese cuisine you can find today.

“Indo-Chinese cuisine originates from an area called ‘Tangra’ – the Chinatown of Kolkata on India’s East Coast,” says Huzefa Sajawal, who co-founded the Indo-Chinese restaurant Fatt Pundit with his brother, Hamza. “This is where the first Chinese community migrated and made it their home and there is still a small population of Indo-Chinese origin living there.”

With restaurants in Soho and Covent Garden, Hamza and Huzefa have used Fat Punditt to introduce and educate eaters about the cuisine’s history through the best way they know how: food. Most of the dishes at Fatt Pundit – like the lollypop chicken, rabbit wontons, and Bombay chilli prawns – employ Cantonese-style cooking techniques like ‘wok hei’ or the art of making dumplings with the use of ingredients and spices that have both Indian and Chinese origins.

“I feel the term ‘fusion cuisine’ is sometimes misused or overused as a novelty; as mixing ingredients from two different regions doesn’t always lead to good things, it often leads to a clash of flavours on a plate,” says Huzefa, “for good fusion food, one must combine ingredients and cooking techniques from cultures in a way that finds balance in flavour, texture and nutrition.” 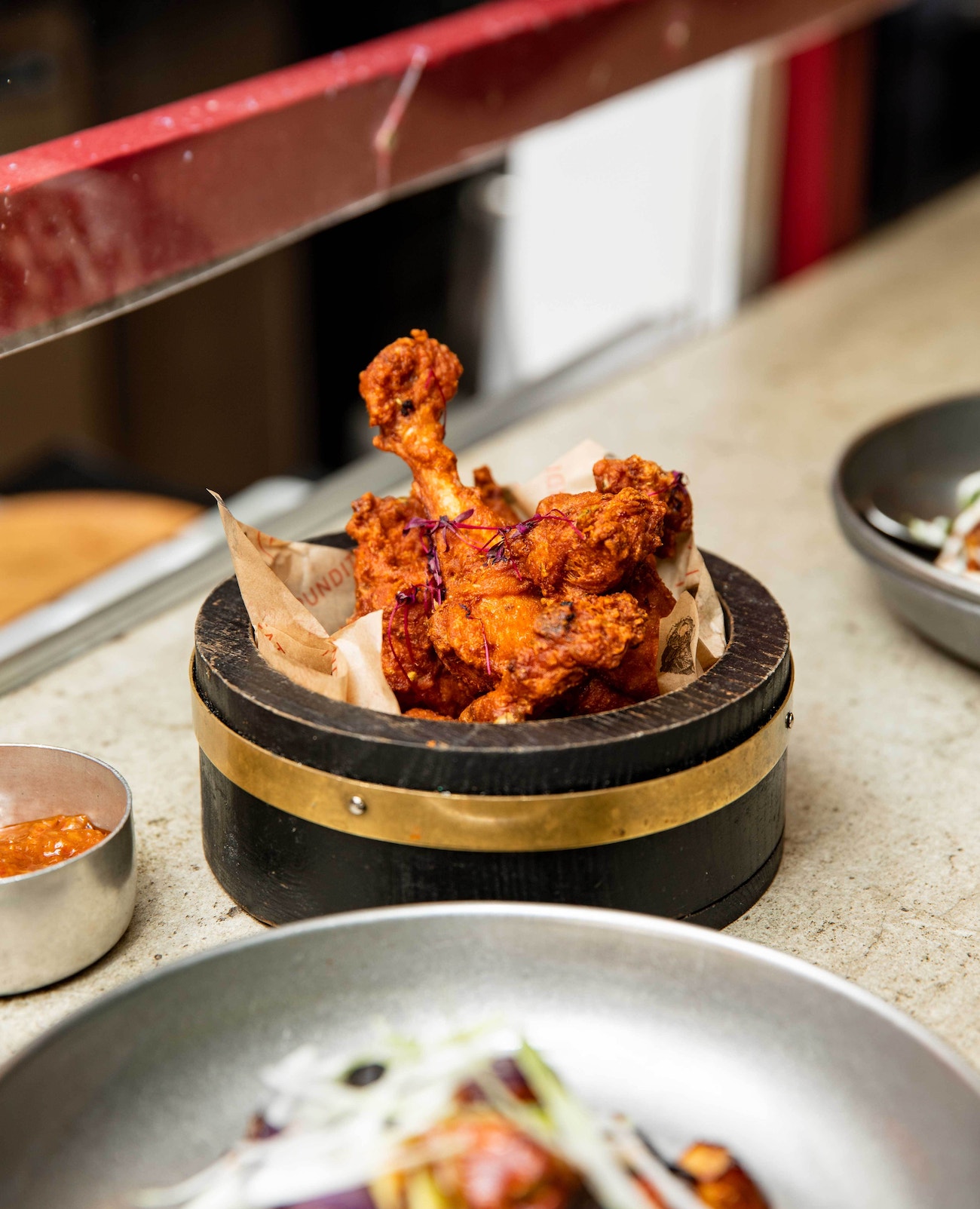 “Indo-Chinese cuisine has gone beyond fusion cooking,” he adds, “it's become a cuisine in itself that has developed for over a century now. You’ll find Indo-Chinese dishes on every menu all across the nation, and it has become the most preferred cuisine for people to dine out in India. Every region and state in India has made it a part of their own dining culture now. The goal for us is to make the food as authentic in taste as one would get back on the streets of Tangra, using the best of ingredients available.”

Jonathan Nunn has spent an admirable amount of time highlighting the best places to eat Desi-Chinese food in London. “All cuisines are fusion cuisines,” Jonathan tells MOB Kitchen, “I see no reason why a fusion cuisine that becomes enjoyed by enough people, and in some sense becomes canonical, can't be a cuisine in its own right. Desi-Chinese or Indian-Chinese food is both a part of Indian cuisine, a part of Chinese cuisine, but also its own thing, both regional to Kolkata and global. The idea that cuisines should all somehow be strictly bound to the nation state is quite a restrictive concept.”

Fusion, when done right, can be a truly impressive thing. Like when Gohan and Trunks do a fusion dance to become Gotenks in Dragon Ball Z’s Majin Buu Saga, the end result even has the potential to be greater than the sum of its parts. Or at least have the potential to reach more people than a more straightforward or traditional cuisine would. I’ve touched upon the pan-Asian craze that swept across kitchens in Britain and while a lot of the food that came out of that trend was vastly disappointing, it did manage to make strides in introducing Brits to a wider range of Asian flavours and cooking styles than ever before. Even if it’s through a striploin marinated in garlic miso, standardizing the use of miso – and canonizing it as a “normal” ingredient for someone who has never seen it before – can only be a positive thing. While a diner might start off on the pan side of the menu, there’s always a chance they’ll err more towards the Asian side of proceedings in a subsequent meal.

That’s sort of the idea behind pan-African restaurants like Stork, where head chef Taalib Adanse is cooking up plates of accessible cooking aimed at introducing diners to classic African ingredients. Adanse’s ras el hanout goat beignets are the perfect example of a fusion dish that does just that – presenting goat, a meat that is prized across Africa for its unique flavour and tenderness when slow-cooked, in the form of a deep-fried nugget. A foodstuff that even the pickiest eater can recognise. At Stork, the ambition is to introduce diners to the ingredients and produce that is both custom and traditional to Africa. Papa L’s Kitchen is a pop-up on Jermyn Street attempting to do something similar.

Lawrence Gomez is the head chef at Papa L’s Kitchen and describes himself as a “pioneer of modern African-fusion“. What does “African fusion” mean to Lawrence? “It’s a mix of my culture, Gambian, and food from the Pan-African and Caribbean diaspora mixed with European techniques,” he says. Fusion-y dishes on the menu at Papa L’s include spiced plantain and red mullet stew.

“I love [fusion cuisine] because we can experience different food cultures, when it is done right, without having to travel,” says Lawrence, “this might also make you want to travel to that particular country.” Broadening one’s horizons is certainly a good thing. And if a brilliant Filipino-Japanese ramen can inspire you to book a ticket to Manila then that’s certainly a positive influence in my eyes. 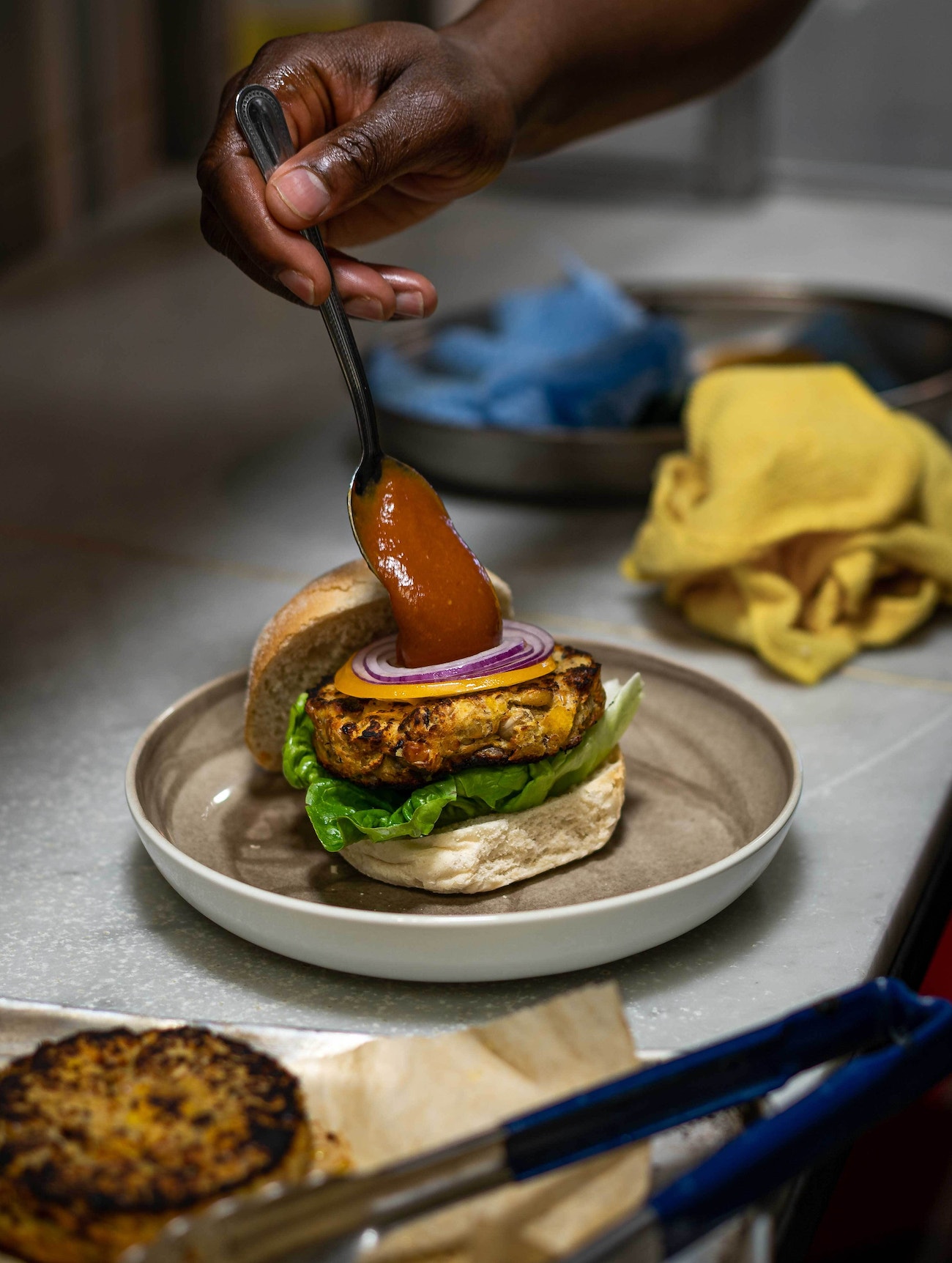 Should anyone be allowed to cook food from any culture that they like though? “Yes,” says Jonathan, “when you get into the question of who should be allowed to profit from any culture they like, then you get into slightly more tricky territory, but these issues are about representation, opportunities, and ultimately power. Ultimately, it's very easy to see when things are done with respect and when they aren't, and it usually translates into the quality of the food. I want to shout out the owner of Levant Book Cafe, a Syrian cafe in Park Royal that puts Palestinian kunefe from Nablus on their menu and highlights its origin. He says you should know the history of what you put on your menu and give respect to its origins. That is a very simple dictum to live by, and one which places like Ivy Asia fail at on the first hurdle.”

Lawrence Gomez also thinks the answer to that question is “yes,” but only under the proviso that the cook in question has actually done their homework. “The most important thing is that they respect and acknowledge the culture first,” he adds. Fatt Punditt’s Huzefa is another who is firmly in the “yes” camp and a believer in the Ratatouille ethos that “anyone can cook”. “Most of the staples we eat today have come from cross-culture and trade, and people experimenting,” says Huzefa, “so if we are looking for the next food trend or innovations we must not restrict anyone.”

If everyone were to stick to their own native cuisine and never dabble with the methods and ingredients of other cultures, the world would be a pretty flavourless place. So while fusion has its flaws and can, when done poorly, cause genuine offence, it’s also the only way we can move food forward and create something truly “new”. Fusion is, whether you like it or not, the future.