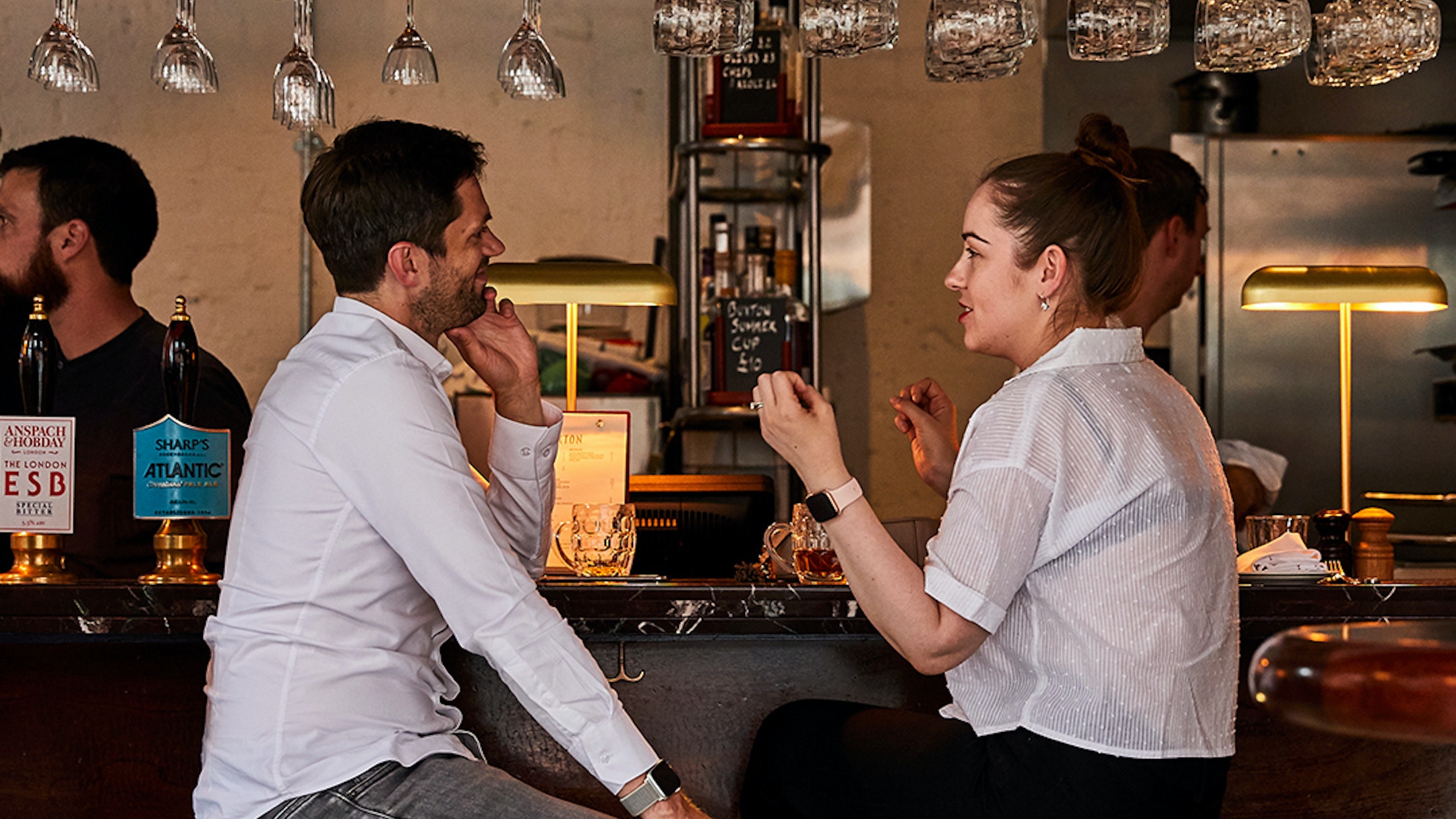 Best Pubs That Don’t Give A F*** About The Football

Not a fan of the football? Tired of seeing Jack Grealish's calves? Want to enjoy a pint in peace and quiet? These are the pubs that aren’t showing the Euros. 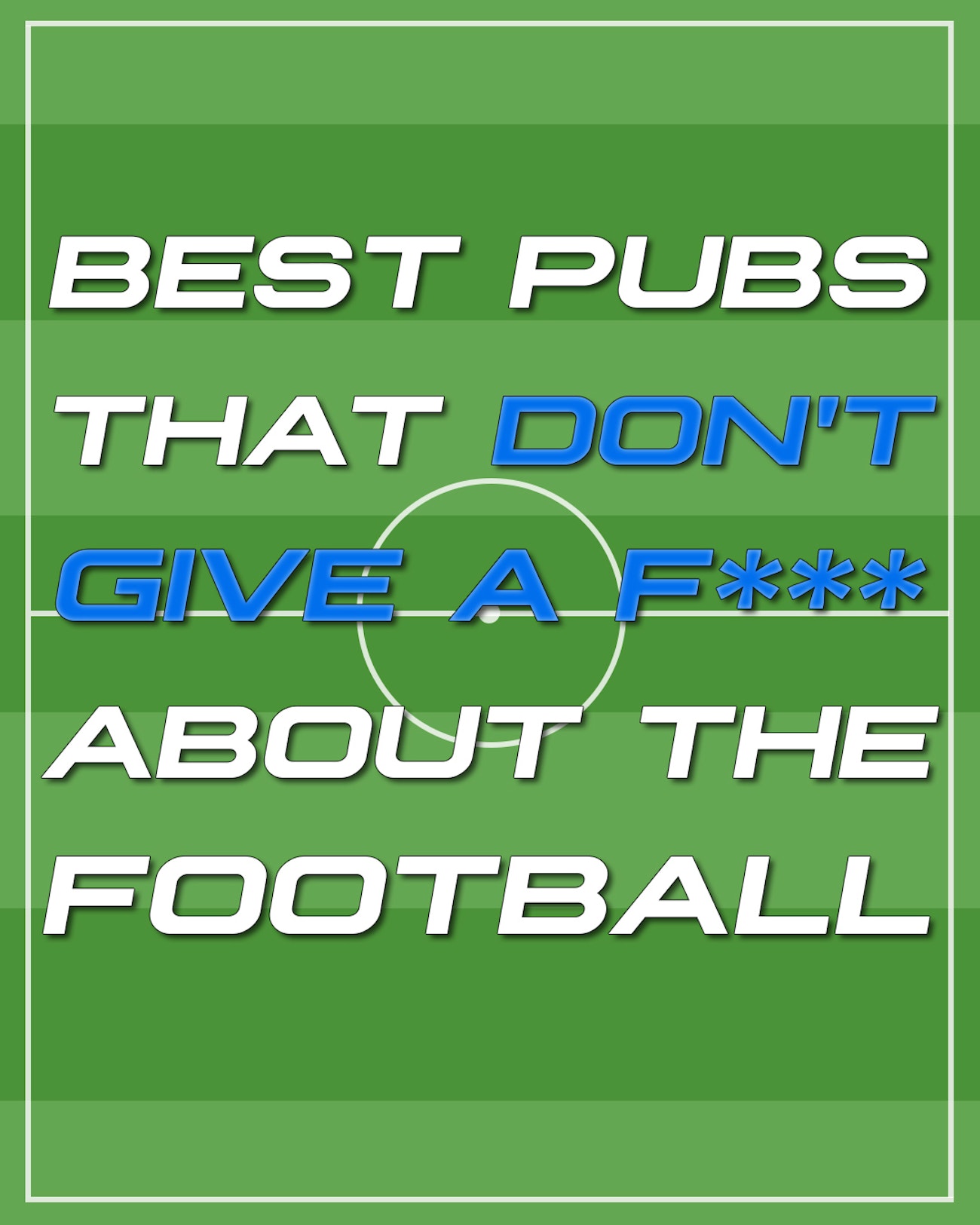 Forget football even exists at these great pubs.

Something’s spreading through the nation like a plague, infecting anyone in its vicinity, and causing turmoil and uproar. Yes, that’s right: football is back. With Euro 2020 now in full swing, there’s a seemingly never-ending list of places all over the country where you can eat food and watch football. If, however, you’re the sort of person that doesn’t like football, international tournaments can be a bit of a pain in the arse.

If you want somewhere to drink a nice pint where you don’t have to worry about a gammon mansplaining the offside rule to you, you’re not completely out of luck though. I’ve done some scouting (that’s football talk for “drinking”) recently and found some of the best pubs in London that don’t give a damn about football. Yes, MOB, these are the pubs that aren’t showing the Euros this year. Pick one and settle down to some excellent beer and appealing eats.

This gem of a Georgian pub might be in north London but you’re unlikely to find any rowdy Gooners here on match day. Much to my personal delight. The Albion’s vibe is super family-friendly with a lush interior and verdant garden that makes this an excellent pub to visit for a languid, hours-long sit-down meal or a slap dash drink after work.

Yes, this is technically a “micropub” but that’s still got the word “pub” in it, so I’m saying that it counts. The Beer Shop serves an always-shifting range of great beer from independent breweries and you should really hit it up if you’re the sort of person who prefers nerding out about hops and saison over rabona goals. You don’t even need to book: just rock up on the day and be prepared to drink some top-class crafties. 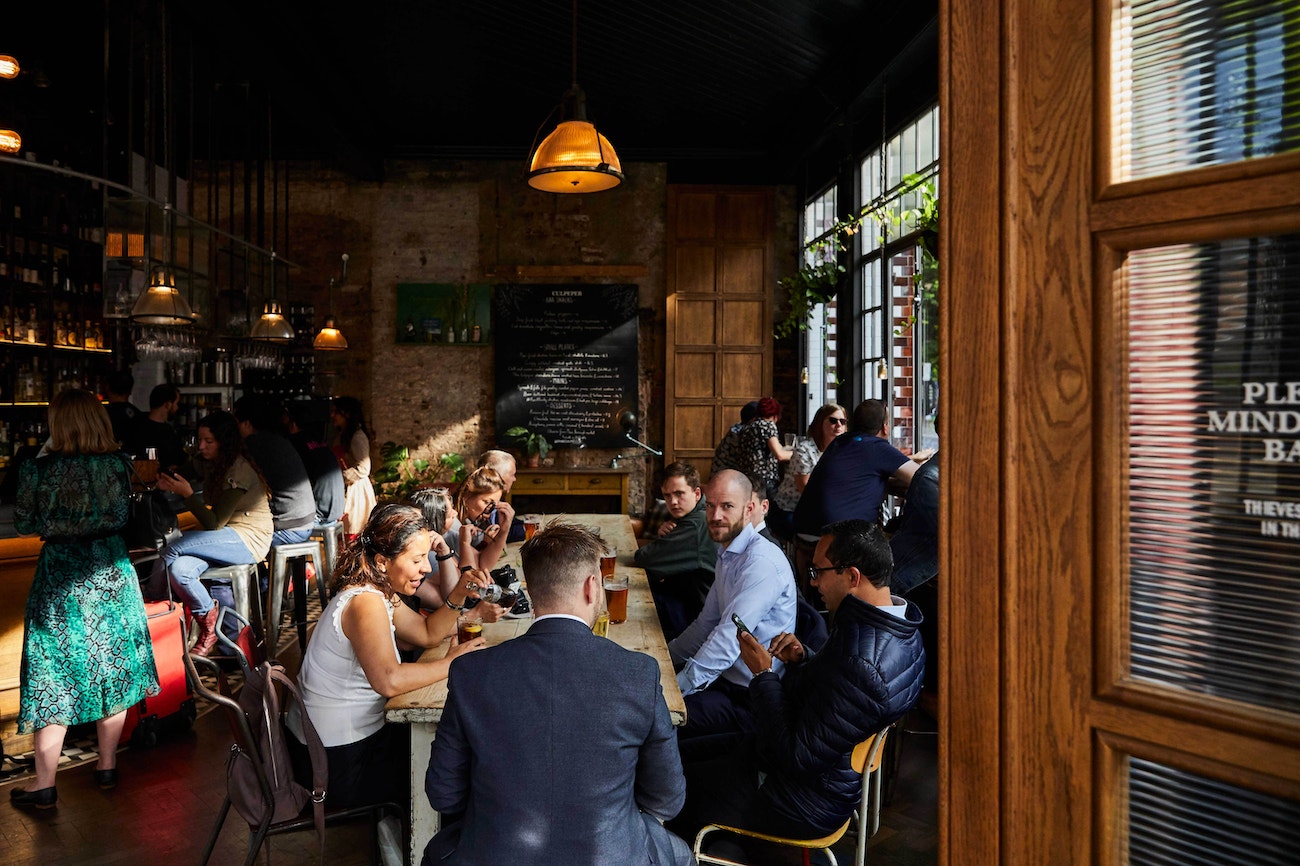 The Culpeper is the best place for a pint and a soccer-less chat. Photograph: Veerle Evens.

A beautiful old building and a big open space are the main sells of The Culpeper. This Commercial Street pub definitely has a lively ambience but it's never too loud for you to be able to hear yourself think or have a measured conversation about things unrelated to VAR. There are plenty of good beers on draught, too, and a nifty little wine list to boot. If there's no room at The Culpeper you can always try your luck at its sister pubs, The Buxton in Brick Lane and The Duke of Cambridge in Islington. Neither of those will be showing the football either. Lovely.

Sam Smiths pubs are known for their no-music and no-tellies rule which makes them an excellent option if you want to avoid hearing the shrill of a referee’s whistle. One of my favourite Sam Smiths pubs in London is the Yorkshire Grey in Fitzrovia. It’s tidy, pretty on the inside, and one of those haunts you can easily lose yourself in for a couple of hours. 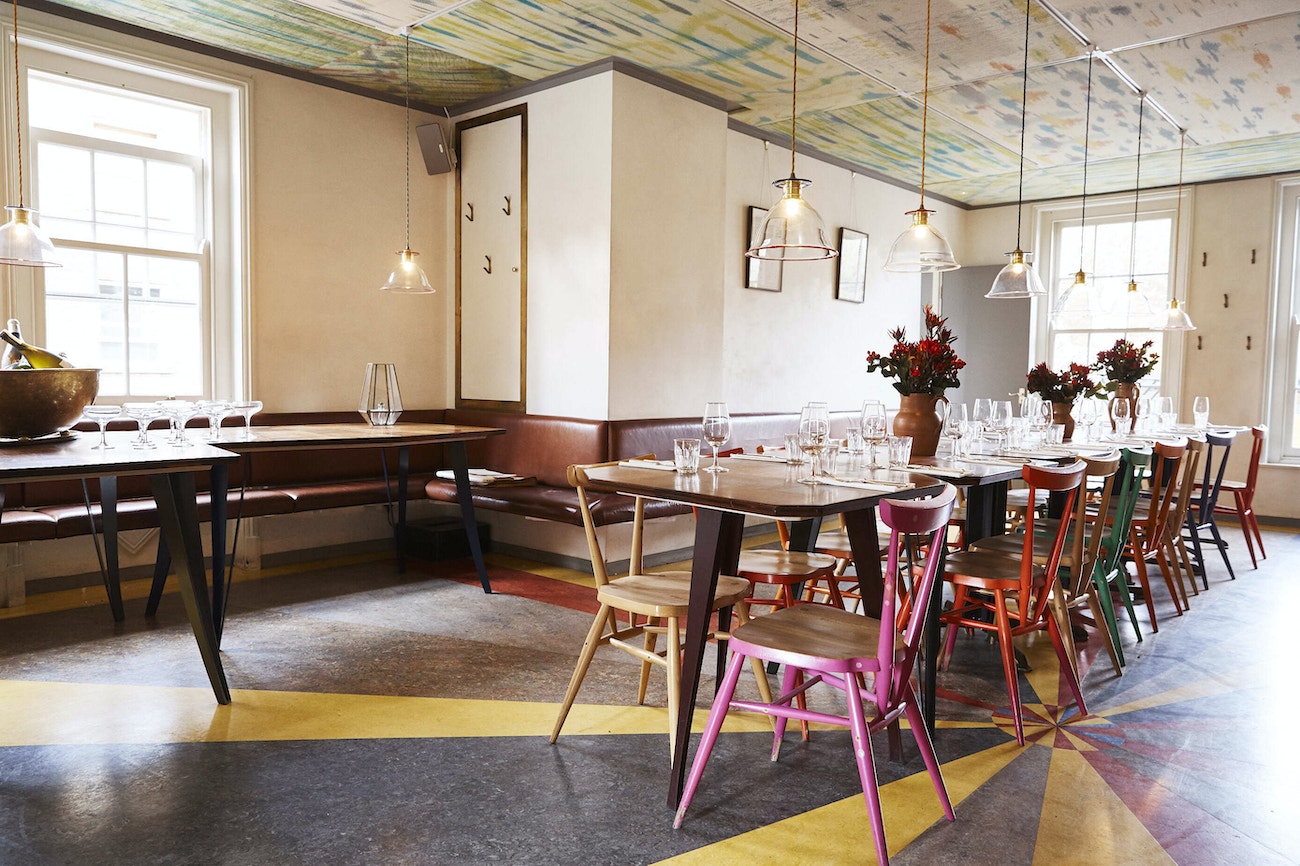 No hat tricks will be scored here. Photograph: Harriet Clare.

I’ve previously raved about the Marksman for being one of the best food pubs in London (because it is) but I’m more than happy to continue raving about it for its lack of soccer coverage. It’s not that the proprietors or punters here don’t care about football, it’s just that there’s a time and a place for it. And that time and place is not when you’re enjoying a lovely, lovely meal at this lovely, lovely Hackney pub.

To quote Doja Cat: “bitch, I'm a cow, bitch, I'm a cow, I'm not a cat, I don't say meow.” No, I’m not entirely sure what you’re meant to take away from that. But The Cow is a good pub. And it isn’t just a pub that won’t be showing the Euros this year – it’s actually one of the nicest pubs in the whole city. The vibe here is Guinness and oysters and you’d be remiss not to eat something from their excellent à la carte menu.

This baby blue pub in north London is more about high ceilings and chandeliers and less about shin pads and Gary Linker shitting himself. The Drapers Arms is super neighbourhood-y and it’s the exact sort of pub where you’re going to want to become a regular. Especially when England are playing and you want to avoid hearing someone singing ‘Rule Britannia’.

Jay Rayner once said that visiting The Coach was “like greeting a much-missed old friend,” and I certainly can’t argue with uncle Jay on that one. This old school pub has been given a fresh lick of paint over the years and its heaving Sunday roasts aren’t to be missed. Thankfully, this old friend doesn’t keep up-to-date with the football, making The Coach a prime spot for poring over wine lists rather than team sheets.

The Princess of Shoreditch 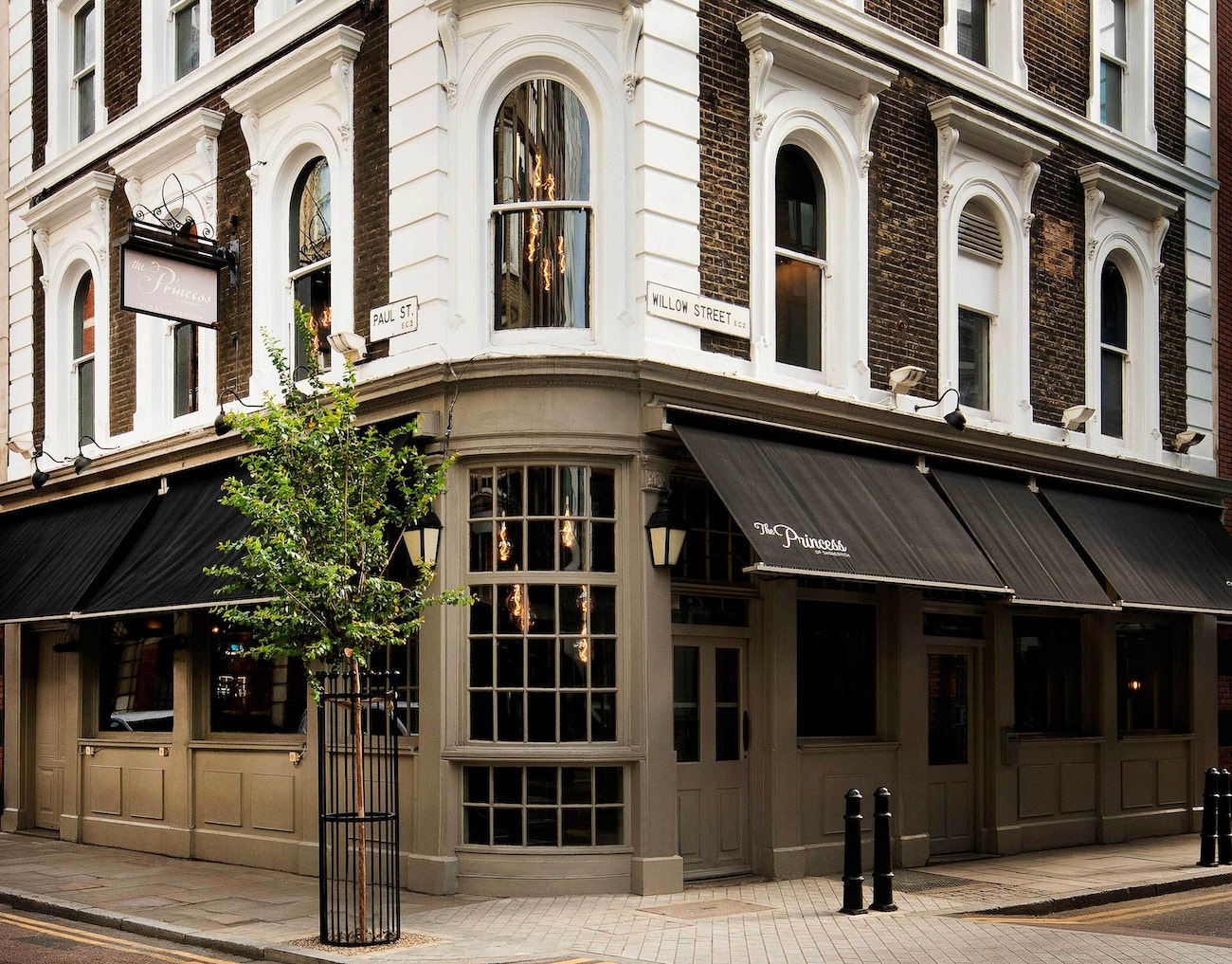 No one cares about the score at The Princess of Shoreditch. Photograph: John Carey.

Shoreditch can be hell on Earth when there’s a big game on but The Princess of Shoreditch, tucked out of the way on Paul Street, offers a peaceful alternative to that raucousness. Head chef Ruth Hansom does the absolute business on a range of British classics here as the seasonal menu you can find upstairs at the Princess is truly something to behold. And eat. The downstairs bar has a more succinct food offering but plenty of wines, craft beers, ales and tenderly made cocktails to capture your attention.

This dinky waterside pub is home to the smallest bar room in the world and devoid of any of the trappings of a modern gastropub. The Dove is full of nooks and crannies designed for hushed voice conversations and not the sort of place where live-streaming the azzurri on your phone comes highly recommended. Just sit down, shut up, and relax.

Great food, great pints, and a great pub garden. You can find all of that at The Spaniards Inn. Despite being located in the city, The Spaniards Inn has the atmosphere of a proper quaint country pub. So much so that leaving it and being assaulted by the sight of grown men that have had their faces painted with a St George’s cross can be a little disconcerting, to say the least. The only way to remedy that, of course, is to do a full 180 and return back to the football-less serenity of The Spaniards Inn.

As a Victorian pub in Hackney, the Chesham Arms is a venue that manages to be both traditional and contemporary at the same time. It’s so old school that it’s practically forward-thinking. Real ales dominate most of the tables here and it’s easy to see why this pub was so passionately fought to be saved by the local community. A real belter of a boozer.

As the oldest pub on the River Thames, it’s sort of up to The Mayflower to set the precedent for which all other pubs should follow. I’m personally pleased that precedent includes a plethora of well-kept ales and various plates of fresh, seasonal food. And that it excludes massive projectors blaring out tinny renditions of Three Lions.

Ye Olde Cheshire Cheese is one of those rare and ancient pubs that was rebuilt shortly after the Great Fire of 1666. It’s also one of those rare and ancient pubs that’s never had anyone sing ‘Will Grigg’s On Fire’ inside its hallowed premises. Mark Twain and Charles Dickens both used to frequent this Fleet Street haunt so the best way to honour them is by coming along with a notebook and writing something awfully witty and amusing. Like this very paragraph which I wrote in Ye Olde Cheshire Cheese on my iPhone. Just as Dickens intended. 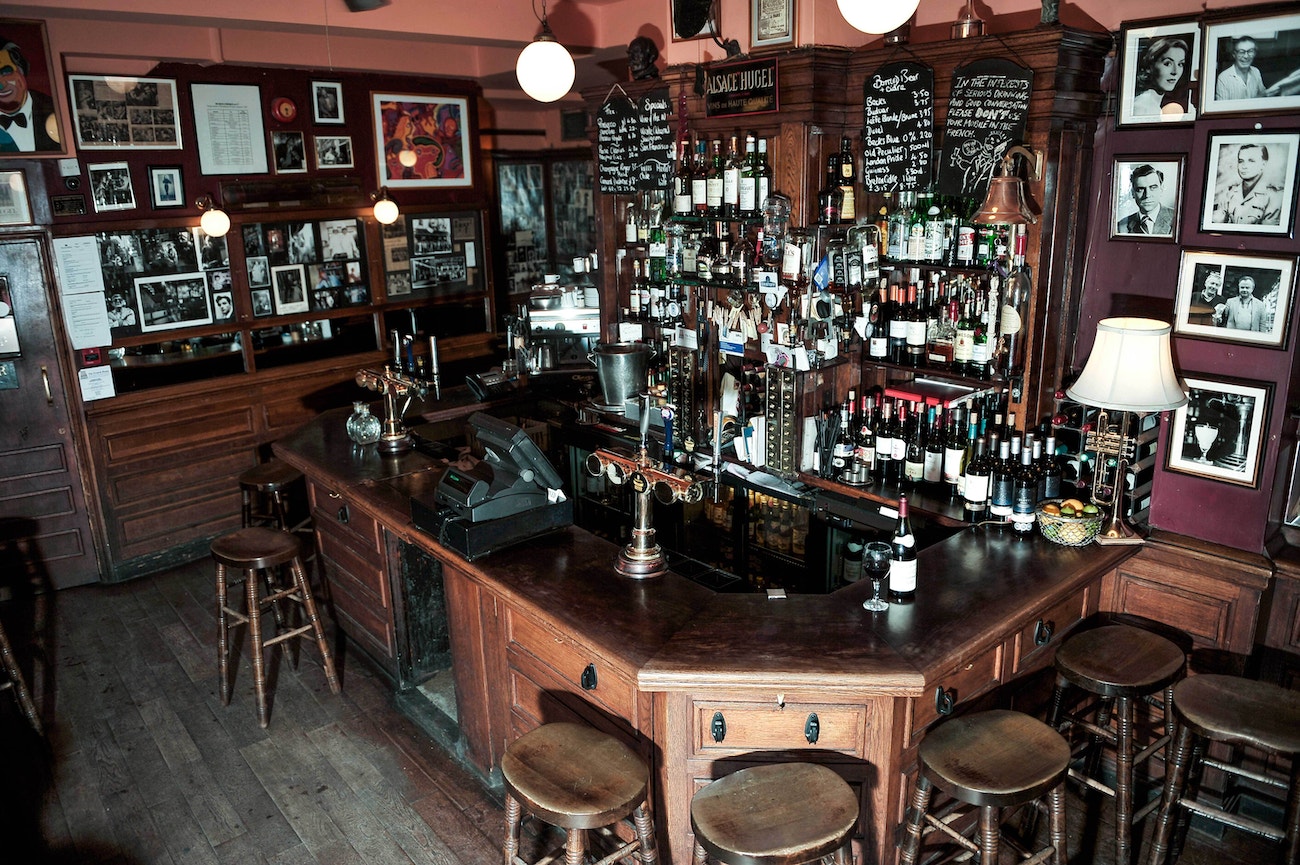 A London legend by just about every definition of the word, The French House won’t be showing any of the Euros this summer. What they’ll be doing instead is serving innumerable glasses of excellent claret and seasonal British fare that’ll put most restaurants in the city to shame. This might be a pub that doesn’t give a toss about football but it’s a pub that very much does give a toss about everything else.